Actor and Texas native Woody Harrelson has sent a letter to Texas Governor Greg Abbott asking him to ban a wild hog catchevent in Bandera, claiming it violates Texas animal cruelty laws. Harrelson was moved to compose the plea after PETA shared video of pigs and piglets being wrangled and chased at the now-controversial annual Bandera Bacon Bash.

In the letter, shared with Fox News by PETA, the Academy Award-nominated actor asks Abbott to end the 17-year event over concerns about “the cruelty that the pigs are subjected to.”

“I have a lot of pride in my home state and the compassionate, independent spirit of my fellow Texans,” Harrelson begins in his letter, before going onto express his “shock” over the footage he witnessed during the hog catch. 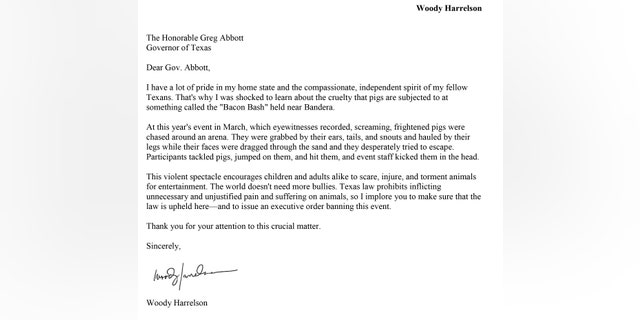 In the letter, shared with Fox News by PETA, the Academy Award-nominated actor asks Abbott to end the 17-year event over concerns about “the cruelty that the pigs are subjected to.”(PETA)

“At this year's event in March, which eyewitnesses recorded, screaming, frightened pigs were chased around an arena. They were grabbed by their ears, tails, and snouts and hauled by their legs while their faces were dragged through the sand and they desperately tried to escape. Participants tackled pigs, jumped on them, and hit them, and event staff kicked them in the head,” he continued in the letter, which accompanies a petition on PETA'swebsite.

Harrelson likened the behavior to bullies and wrote that the violence encourages inhumane treatment of animals.

“This violent spectacle encourages children and adults alike to scare, injure, and torment animals for entertainment. The world doesn't need more bullies. Texas law prohibits inflicting unnecessary and unjustified pain and suffering on animals, so I implore you to make sure that the law is upheld here—and to issue an executive order banning this event,” he concluded.